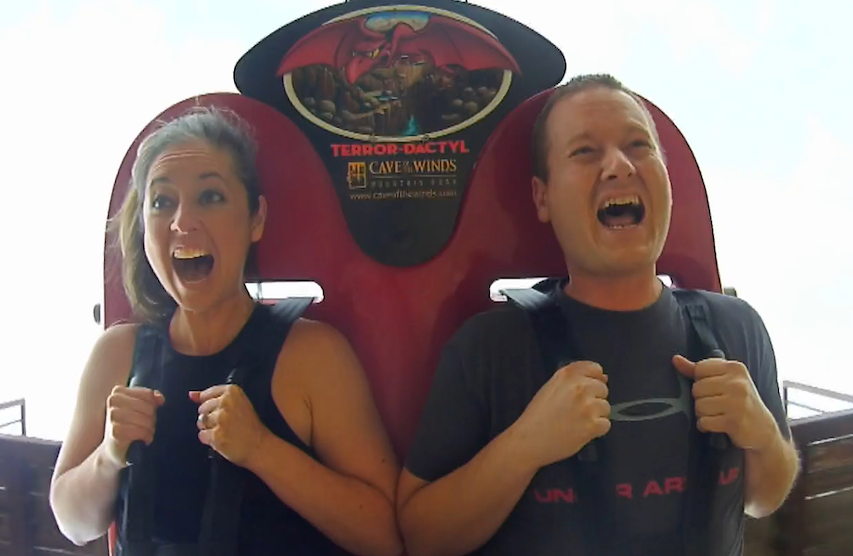 Free-falling off a 200-foot cliff into a massive canyon, you learn a lot about human nature!

Wait, let me back up.

This past weekend Dan and I drove to Cave of the Winds in Manitou Springs, CO. An hour drive.

That area of Colorado is absolutely beautiful. You can see huge rocks and mountains for miles.

The heights are breathtaking.

(If you’re afraid, this is the place to conquer that fear.)

Aside from enjoying the scenery, we went for one purpose:

Similar to a bungee swing, this ride is a free fall into a canyon.

You get strapped into a little seat. With feet dangling, you wait.

Then you’re launched into a free fall.

Descending 150 feet through Williams Canyon, you hit speeds of 100+ mph. As you scream, your voice echos.

A GoPro camera in front of you captures all your emotions.

…Afraid of heights, Dan wanted to conquer his fear. So going on this ride was his idea.

(It’s also nice to do something insane every now and then, to get your adrenaline ramped up.)

We got in line. And waited.

In my typical fashion, I observed the “human behavior” all around me.

I observed the energy of others who were also waiting in line.

1. Some people were excited.
2. Some watched from the sidelines and talked themselves out of doing it.
3. Some stood in line and looked as if they were dreading it.
4. Others appeared stoic, no emotion whatsoever.

Everyone watched with fascination as each couple dropped into a free fall.

(Only two people could go at a time. The onboarding process took several minutes in between.)

One kid who looked about ten years old did the ride and wasn’t happy afterwards. “Everyone who recommended this was dumb!” he proclaimed.

Meanwhile, his enthusiastic companion was psyched and wanted to immediately go again.

That second kid soon got his wish…

A woman got all the way to the top of the line… and talked herself out of doing the ride.

She was a young woman, didn’t look ill or anything.

But she was certain she couldn’t do it.

She let him take her spot… thanked him… and made excuses and told stories, as she walked all the way back down the stairs.

(There are no refunds given for the Terror-Dactyl.)

I couldn’t relate to her. I’ve never had “fear” talk me out of doing something I wanted to do. (I’ve had anger talk me INTO doing things I would later regret…but never fear.)

As Dan and I approached the top of the stairs, we got a better view of how the process worked.

I found it interesting that every couple ahead of us, after they completed the ride, tried to tell everyone else what the ride was like.

They offered their two cents as they left… not realizing they were unconsciously diminishing the value of each person’s own experience.

After they got off the ride, some people were shaking. Others were laughing.

All of them told a quick story about it.

Isn’t that the perfect metaphor for life? We experience something… then we tell others a “story” about it, and expect them to buy into our story.

(The news does this all the time. Then they get mad if you don’t turn their “stories” into your personal world view!)

The biggest freedom comes from the philosophy, “Decide for yourself.”

“Don’t let others decide for you.”

Finally, it was our turn.

My goal was to scream as loud as I could. Just for fun.

I’m usually a quiet person, so I knew I had to scream.

We got strapped in… Dan was freaking out. We were both excited. I screamed before we even dropped.

I could describe the experience of falling in words, but you don’t really know something until you experience it for yourself.

We got pics and video of ourselves that captured the pure emotional reaction that came out of us!!!!

In chronological order of our free fall…LOL

This is a great memory that we’ll cherish for life!

And it’s one of countless more that we’ll be enjoying!

P.S. I’ve always known one thing: Other people’s words can’t, and don’t compare to YOUR actual experience of life or business.

If you want to be free, you cannot let other people’s “guidelines,” “recommendations,” or “rules” determine how you interact with this precious gift of life. 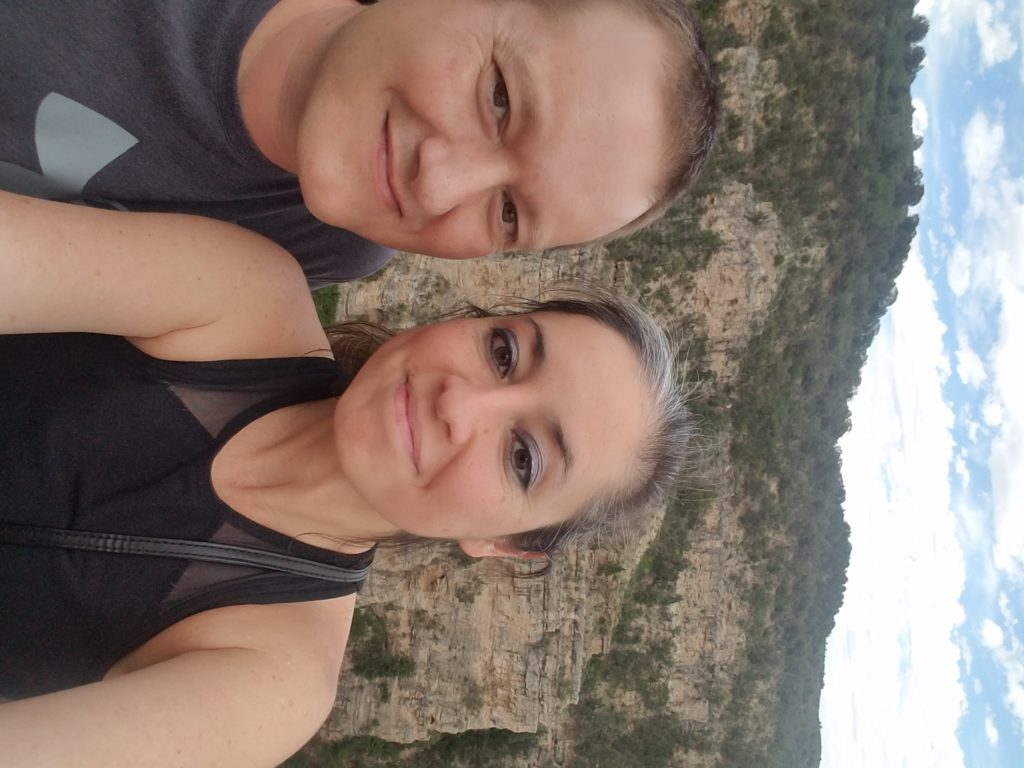 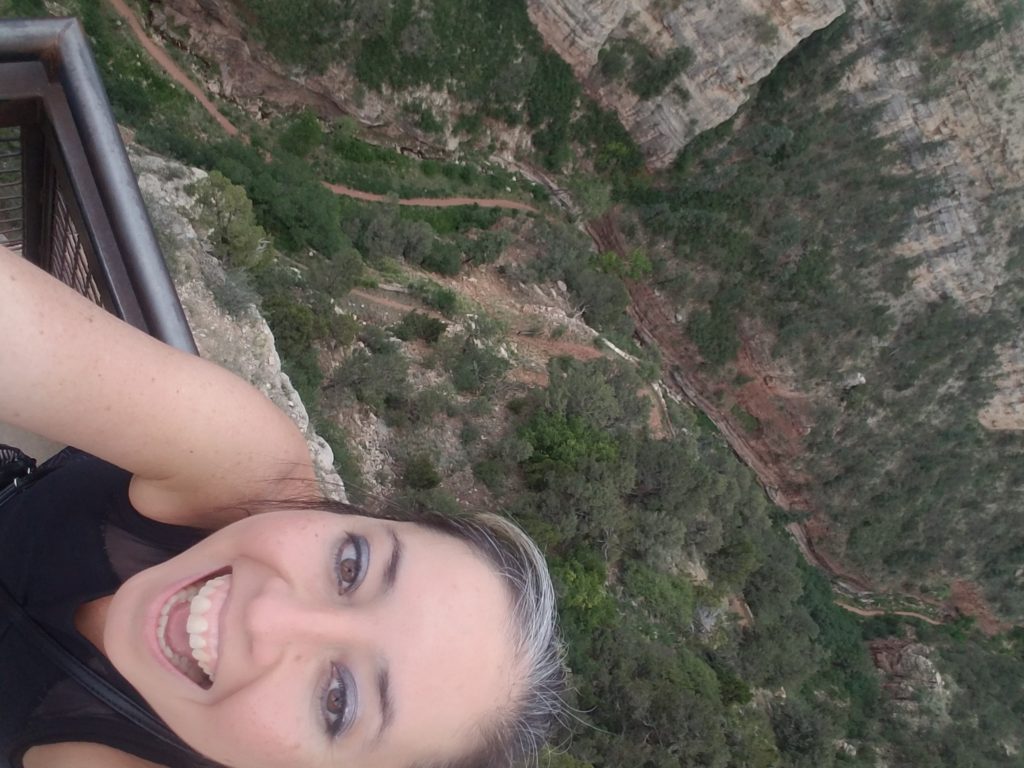 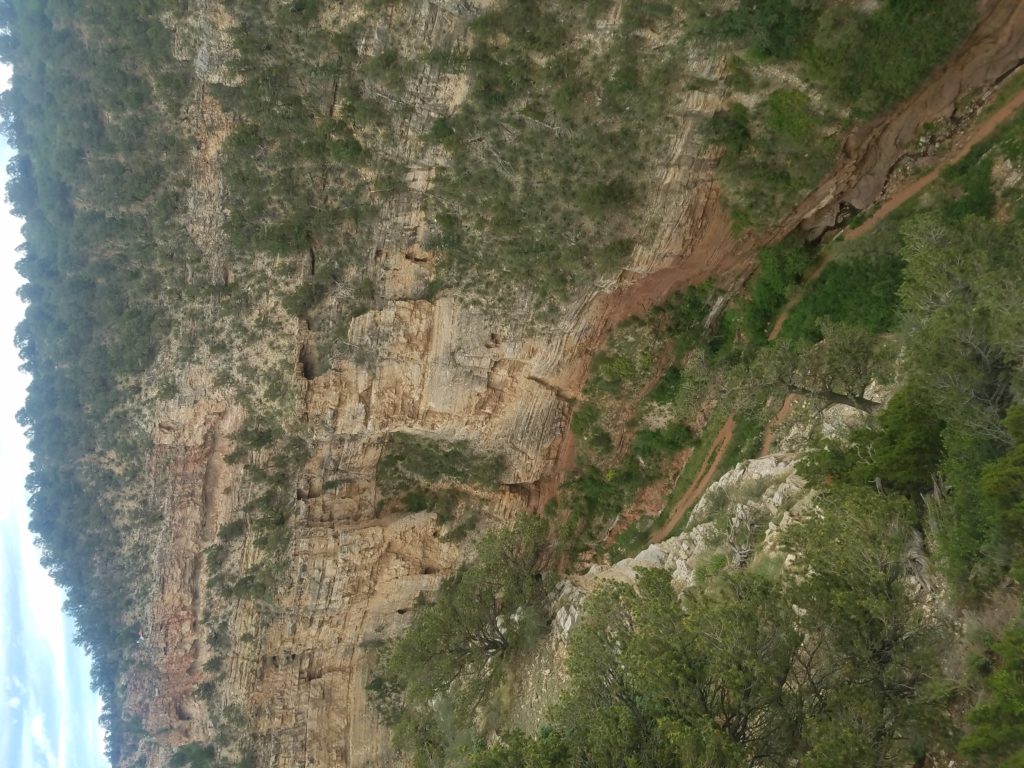 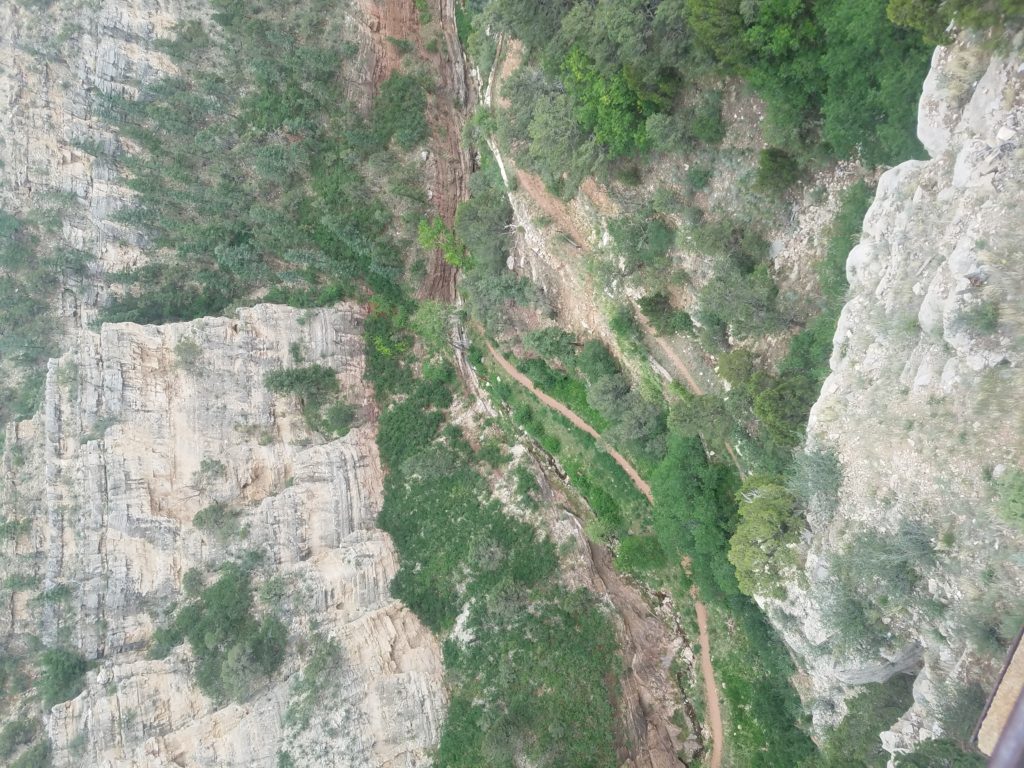 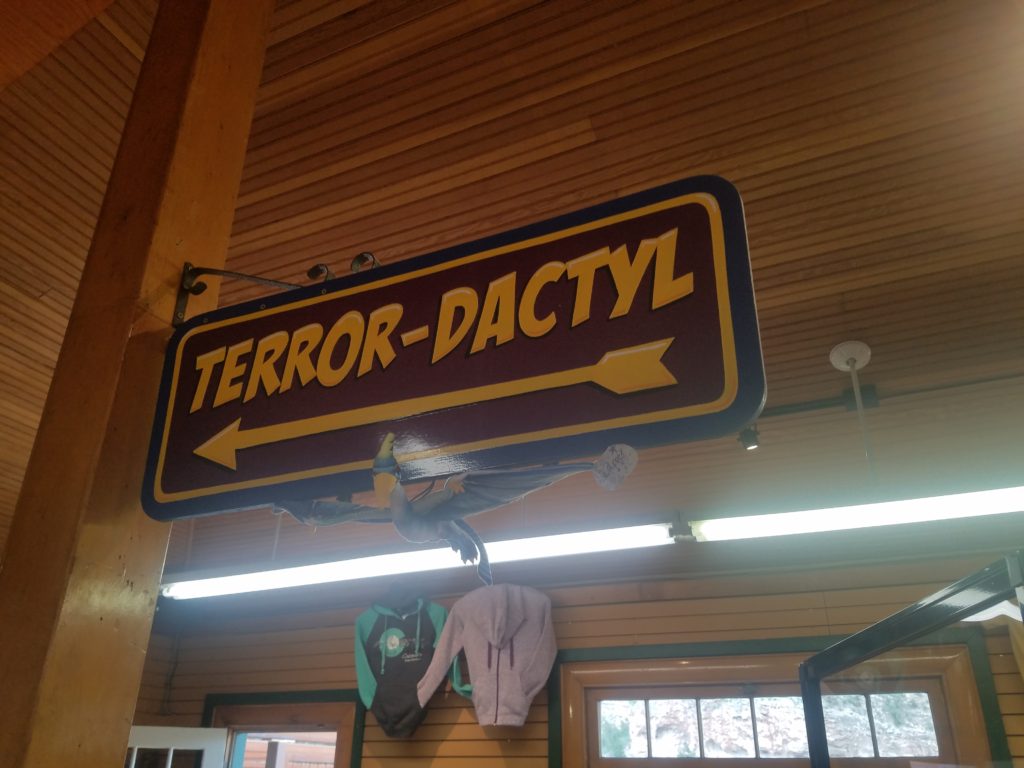 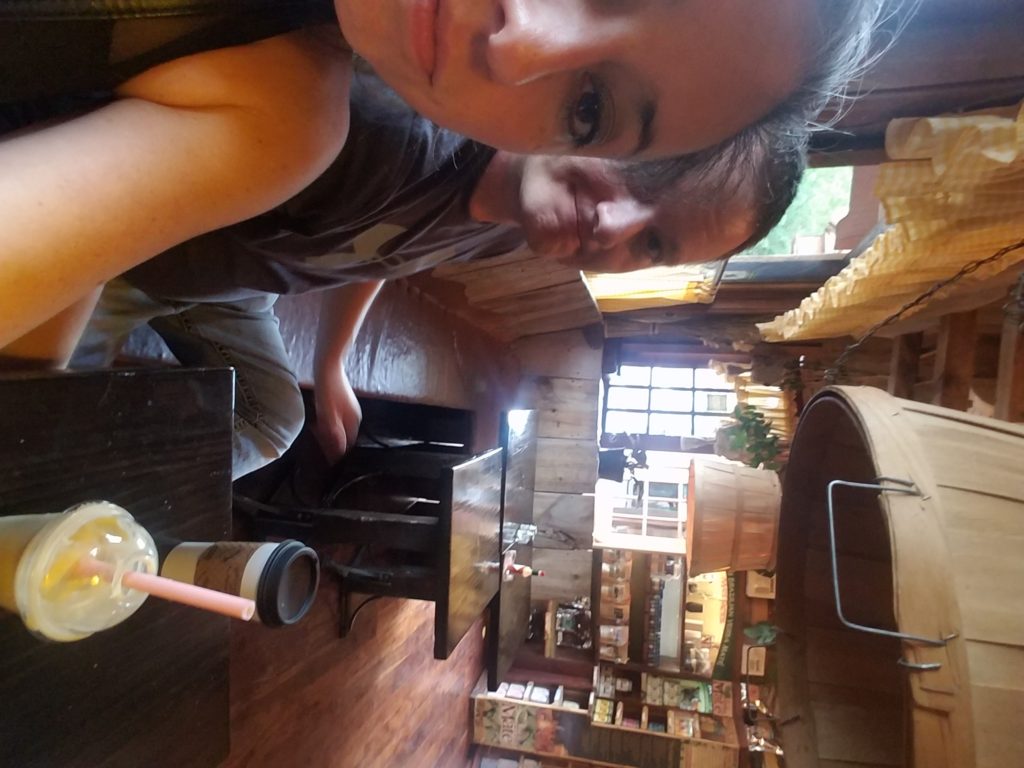 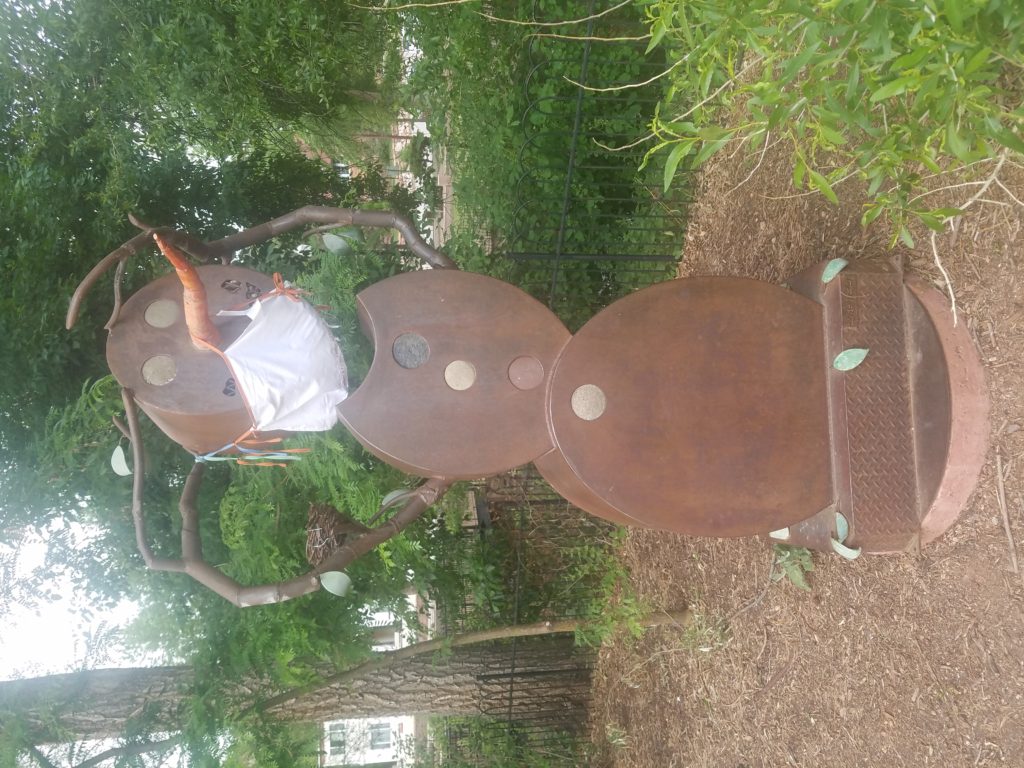 “Manitou Springs thru the eyes of kids” map 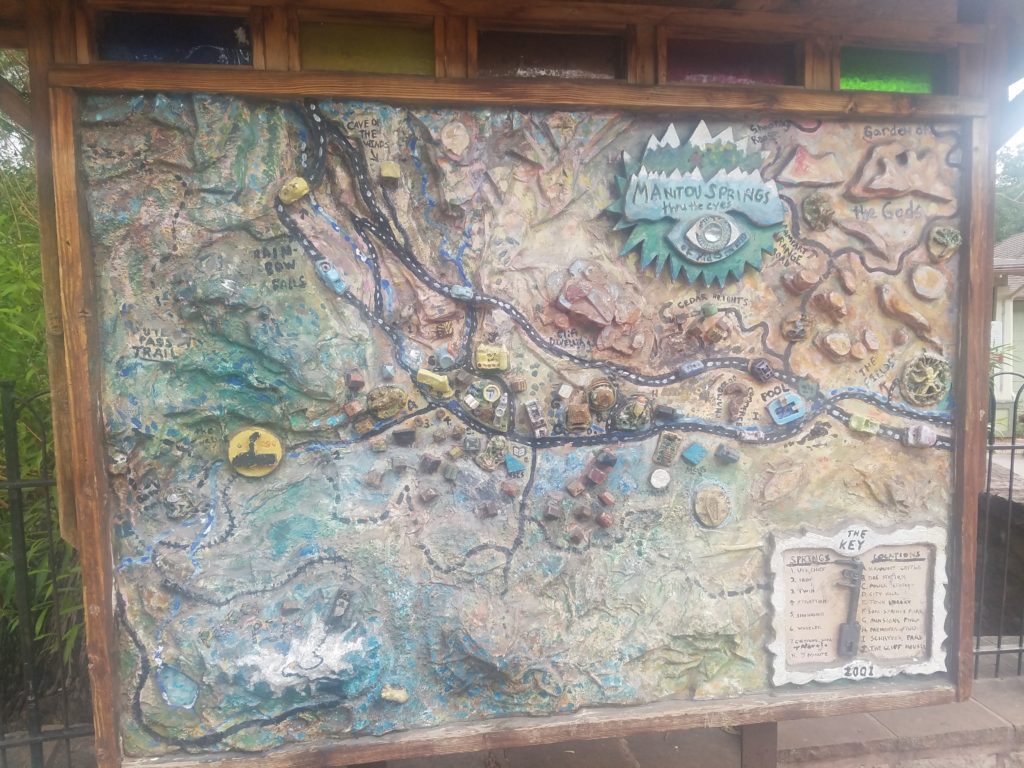