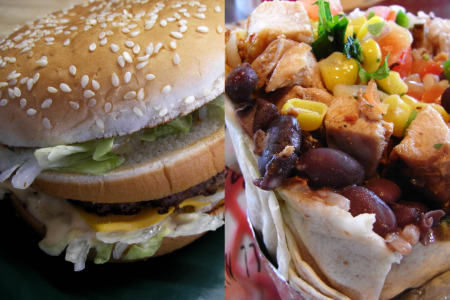 Featured image from The Atlantic.

The title of today’s blog is a mouthful. But the question is, which mouthful contains the most love? A mouthful of McDonald’s, or a mouthful of Chipotle?

Recently, McDonald’s has been in the news for pushing a new marketing campaign focused on love. This campaign seeks to emphasize the word love in their years-old slogan of “I’m lovin’ it” (which, frankly, should be renamed to “I’m probably hormonally imbalanced and craving it”).

Their campaign entails airing ads on TV, including “an animated video where the Joker and the Batman, a mail man and a dog, a blue donkey and red elephant and Smurfs and Gargamel show affection to each other and share McDonald’s products,” says CTVNews.ca.

CTVNews.ca writes: “The push to identify itself with love and positivity in the minds of customers comes at a challenging time for McDonald’s, which is facing shifting eating habits, intensifying competition and growing calls by workers and labour organizers for higher pay and a union. Sales for its flagship U.S. division have continued to struggle even after McDonald’s replaced its president twice in less than two years.”

I’m looking into my crystal ball and predicting a very bad future for McDonald’s.

Let’s face it, the only kind of love McDonald’s increases in the world is love handles.

If McDonald’s was SERIOUS about aligning itself with love, it would intentionally shut down its entire business. It would stop serving food that slowly kills those who eat it. It would cease marketing to children.

That would be real love. Tough, but real.

Chipotle recently discovered that one of its pork suppliers was failing to meet Chipotle’s “Responsibly Raised” standards. Chipotle IMMEDIATELY removed its Carnitas (i.e., pork) from its stores. Immediately.

No tap dancing around it. No ifs, ands, or buts. Chipotle didn’t want said pork going anywhere near its customers – even if it meant losing profits.

Not that the pork was tainted; it simply didn’t live up to the standards Chipotle has promised to its customers.

In a well-titled article called “McDonald’s fixes its marketing, Chipotle fixes its product,” Fortune Magazine contrasts McDonald’s meaningless marketing words with Chipotle’s admirable actions. While McDonald’s is “using Pac-Man and the Smurfs to pump up the appeal of its brand, Chipotle is concerning itself with the integrity of its product.”

The slickest, fanciest marketing campaign won’t save that which is ultimately a bad product.

As consumers continue to smarten up and become more aware of what’s in their food, companies like McDonald’s – which RELY on consumers’ ignorance and naivete – will find their sales continuing to decline.

Here’s a comment from the CVTNews article that shows people are more savvy than McDonald’s thinks:

Another commenter writes: “Rather than hype, stick to basics.”

In my opinion, no marketing campaign will fix McDonald’s fundamental problems over the long haul. The company is better off deleting itself and starting over. It is too far gone to be saved. It cannot be fixed.

While the rising star Chipotle may not be PERFECT, it’s light-years ahead of McDonald’s – the latter of which is behaving like a drowning man fighting for his last breath of air. (Guess you can’t blame McDonald’s.)

But seriously….if you have to fight to hold onto customers, you’re doing it wrong.

If you’re fighting in the name of love… you’re really doing it wrong.

Fun side note: McDonald’s was once an investor of Chipotle. (Chipotle is NOT owned by McDonald’s, contrary to popular belief.)

The Economist writes: “Having once been controlled by McDonald’s, Chipotle is now a threat to its former parent.” Chipotle is enjoying 20% annual growth, a remarkable achievement in the saturated restaurant market.

Fortune says McDonald’s divested itself from Chipotle for profit of $1.5 billion [in 2006]. Today Chipotle is worth more than $22 billion and is doing more than $1 billion in sales each quarter.

About the Author
Michelle Lopez is a copywriter and marketing consultant for organic/natural product companies with a strong message and mission. She helps independent companies strengthen their marketing efforts, improve their sales copy, reach more people, sell more products online, and create lifelong fans. Michelle is also the host and creator of The Organic CEO podcast, available on iTunes and Stitcher Radio.